Did You See Last Night's Game?

Quote: "You can have the outfit on, but still not have the identity.
(Heard in a message at M4M)
I immediately think of the Wise and Foolish Builders. (Matthew 7:24-27) Two houses that probably look the same on the outside, but their underneath, their foundations were very different. One house was just there, sitting on the sand where a good rain or storm would damage if not destroy it. The other was firmly anchored to the rock, where it was secure in the event of a storm. One was for show, the other was a home, a safe place, a sanctuary.
I have a couple of IU (Indiana University) sweatshirts that I wear from time to time. I like IU, and the shirts were on clearance. Sometimes when I wear them, people I run into will ask me what I thought of last night's game, or the season the team is having, or some like question. I like IU, but am not a rabid fan, nor do I follow them closely. So most of the time, I don't know how to answer their question. But they assume I do, because I have the outfit on. They can see the outfit, but not my identity. Sometimes I bluff my way through a conversation, other times I just say I didn't catch the game or I don't know the answer.
Sometimes, people go to church, they do some very good things, they may have even been baptized, they have the outfit on. But I am not sure if they have their identity in Christ. Galatians 1:27 says, "For as many of you as were baptized into Christ have put on Christ." 1 Peter 5:5 says, Likewise, you who are younger, be subject to the elders. Clothe yourselves, all of you, with humility toward one another, for “God opposes the proud but gives grace to the humble.”  The follower of Jesus definitely has a way that they should look. If you want to see more of what that should be, immerse yourself in the Sermon on the Mount. (Matthew 5-7) But know that there were many in the crowd who had the clothes of righteousness on, but did not have the identity. I believe this is why Jesus told the crowd, "For I tell you, unless your righteousness exceeds that of the scribes and Pharisees, you will never enter the kingdom of heaven."  The scribes and Pharisees had the outfit on, but their identity was not in Christ, rather it was in their own accomplishments. They thought they could earn salvation, put God in their debt. Rather, we should look at the mercy and grace of God and consider the debt that we owe Him. Romans 12:1,2 "I appeal to you therefore, brothers, by the mercies of God, to present your bodies as a living sacrifice, holy and acceptable to God, which is your spiritual worship. Do not be conformed to this world, but be transformed by the renewal of your mind, that by testing you may discern what is the will of God, what is good and acceptable and perfect."  It is more than just about wearing the clothes, it is about the identity that goes with the outfit.
Go team! 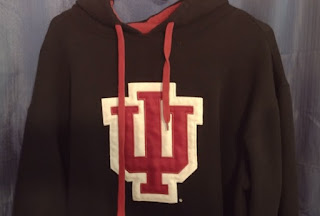 Email ThisBlogThis!Share to TwitterShare to FacebookShare to Pinterest
Labels: Quote of the day, Random Stuff

Bible Gateway - Verse of the Day

Blogs I sometimes have time to read...

Romans 9 and the Sovereignty of God

Read at your own risk!

Jesus + Nothing = Everything --by Tullian Tchividjian

The Prodigal God --by Tim Keller

Your Jesus is Too Safe --by Jared C. Wilson

Radical Together --by David Platt